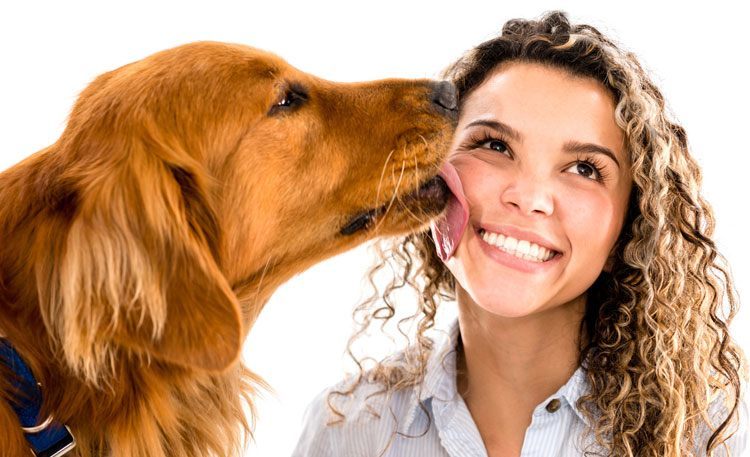 Has your dog licked you yet? Does he lick everything around him?

Chances are you see that a lot every day. And if you wondered why do dogs lick that much, then this post will clear a lot of things up for you.

There are several reasons why your dog is licking. Sometimes it licks objects, sometimes itself and sometimes you. Each type of licking has a different reason. Let’s jump in and take a look at it.

Whether you want to believe it or not, your dog respects you.

You’re like the leader of the pack who he adores so much. And to show how much he respects you, he starts licking you like crazy.

This is a common thing in the dog community. And since your dog has a dog brain, even when it is away from dogs, it is pretty natural for him to come and lick your face to show some respect.

Everyone needs attention, you need some, I need some, and even your dog needs some.

When your dog feels that you’re not giving him enough attention, it can take many routes to get the attention he deserves.

Probably the most passive way of all is licking. When your dog comes and licks you, it is just trying to tell you to spend some time with him. He may also have something serious you need to look into like an empty water bowl or similar stuff.

Be a good owner and don’t make your dog beg for attention again.

You already know this, but let us tell you again.

Your dog loves you.

To show affection, dogs have the habit of licking their fellow dogs and even their mother. That behavior happens with humans as well.

When your dog licks your face, it might be showing affection. This can be very cute in the beginning, but a lot of people will find it annoying as you don’t want your face licked very often.

Be sure when to draw the line. If you are keen to prevent this behavior, continue reading as we discuss how to stop dogs from licking, later in this post.

Yep. You are one tasty human, at least for your dog.

Dogs often like the taste of your skin. There are chances that some food particles might be left on your face, and your dog will lick it with all his energy.

Dogs also love the salty taste of the skin. Sometimes, it might even be the smell of the skin that initiates licking. In any case, be aware of the fact that your dog likes tasting you (weird, but true).

Dogs are keen to keep themselves clean.

You may not believe this easily but if you see your dog licking himself, he is, most probably, trying to clean him up.

You may have observed this behavior in cats. And dogs are no different.

Keep an eye on your dog to spot excessive licking as it could indicate that the glands have to be expressed.

Dog’s saliva has enzymes (such as Lysozyme), and these can be helpful in healing wounds.

When your dog licks his own wounds, the tissue factor in the saliva promotes the blood clotting mechanism. This way the dog can lick its way out of a wound.

But be sure to check the wound and see if it requires more attention. Not all wounds are simple, and your Vet knows better than you in this circumstance.

A dog’s life can get pretty stressful. Licking is one of the ways the dog can relax himself.

When a dog licks, Endorphins are released, and these play a vital role in relaxing your dog. Whenever your dog licks himself, you or anything, he might just be trying to relax himself.

“Hey You, Get me something to eat. I’m Hungry”.

This is what dogs mean, sometimes, when it licks the life out of you. Your dog usually licks your face when he is hungry and not anywhere else.

When dogs are in groups, the dog will lick its pack leader’s face to get some food. The same is done by a puppy to his mother. Since you are both the pack leader and the parent, your dog licks your face when he is hungry.

Don’t like it? Then fill his bowl at the right time before he licks (asks) you.

Why do dogs lick people? Why lick that thing down there in the yard and this one here in the living room?

Because that’s one of the ways he can explore stuff. If he smells something is different on you, then he’ll lick you to see if anything as changed.

He spots a new ball in the house, how does he know what it does? He smells it, moves it around and licks it! And he does that with almost everything. There are many ways for a dog to explore stuff and licking is a big part of the process.

If you’re wondering how to stop your dog from licking himself, then take care of his parasite situation.

Parasites and fleas can be a real irritation to any dog. He will lick and even try to bite the spot where he feels the itch. This in most cases might also be accompanied by excessive scratching that confirms the presence of fleas/parasites.

At times, he just wants to play with you. He’ll come right up to you and start licking you on your face and arms.

This need can be easily understood by looking at his mood. He is all happy and energetic, and nothing seems to bother him. When you pick up a toy, he’s all pumped up, and that’s when you know your buddy wants to play.

Compulsive licking is not a good thing. If your dog is excessively licking at the same spot, it could mean two things.

Either he needs medical attention for some wound or he is suffering from anxiety and related issues. If you do not look into it as early as possible, the situation could get really worse.

Your dog cares about you more than you think.

Sometimes the dog wants to know if you are in a happy mood or not. They lick your face and arms and use the scent in your sweat and find out if you are stressed.

He might also be trying to cheer you up, so don’t be so hard on him if you’re not in a great mood.

Is Licking Too Much Bad?

Here’s what. You can never control the licking habits of your dog. You can do something about licking you, but not others.

It’s not easy to find when your dog is licking too much. But if he is licking the same spot over and over again, it might be a good idea to take a look at it.

Excessive licking means your dog either has a medical condition or has a bit of anxiety. So don’t delay his visit to the vet if you think he needs one.

How to Stop Your Dog from Licking You?

Many people adore the licks from their dogs as they see it as a way to express their affection.

But some of us may not be big fans of the same. If you are one of those guys who say that my dog won’t stop licking me, you can follow a simple method to stop it slowly.

When your dog licks you in a place you don’t like, get up and move out of the room. Your dog wants to be with you, and this will dampen his spirits.

Slowly, he will learn that licking you can take you away from him. As a result, he will stop this behavior slowly. Be sure to come back after a while so that he doesn’t miss you too much.

So, is your dog a licker? Do you like it? Tell us more about how you handle this sticky situation in the comments section below. And be sure to share this with your friends if you think this would help them.